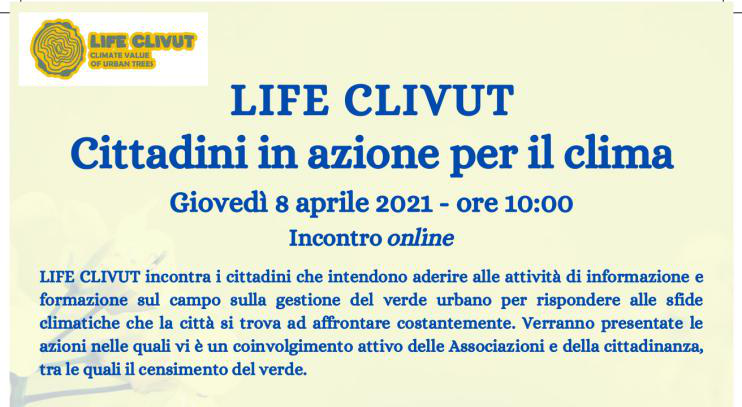 LIFE CLIVUT has organised the first online meeting with the Association, which deal with the safeguard of the environment and the green areas of the Municipality of Perugia, in order to involve them in some activities within the Action C2 – Action for the urban climate.

The aim of Action C2 of the Project is to create partnership with the Association so as to make them more aware of the green role in the mitigation of climate change and to actively involve them in the census activity of public and private green areas. Only through knowledge and sensitization of all age groups is possible to act for the improvement of the already existing urban green spaces and for the planning of future ones.

The city of Perugia has more than 14000 hectares of tree coverage, of which about 1100 hectares are public green and 4400 hectares represent private green. In public areas there are more than 48,000 trees. The management of this tree heritage and the planning of interventions within the existing and future green spaces is one of the priorities of the municipal administration. LIFE CLIVUT is a European Project of Information&Governance, therefore it aims to assess and raise awareness of the green space benefits offered to the city in the mitigation of climate change effects,  particularly in relation to the urban heat island phenomenon.

Hence, the LIFE CLIVUT Project has contacted over 70 Associations in the Municipality of Perugia. During the meeting of the 8th of April many of them have expressed their desire to collaborate in the activities proposed by the team of LIFE CLIVUT.

This first meeting represented an important opportunity to know each other, to promote the exchange of ideas and thus confirm the Association interest to collaborate within Action C2 of the Project.

At the end of the event we scheduled future meetings to continue the training and information of the Associations, and eventually allow the involvement of new Associations in the LIFE CLIVUT Project.